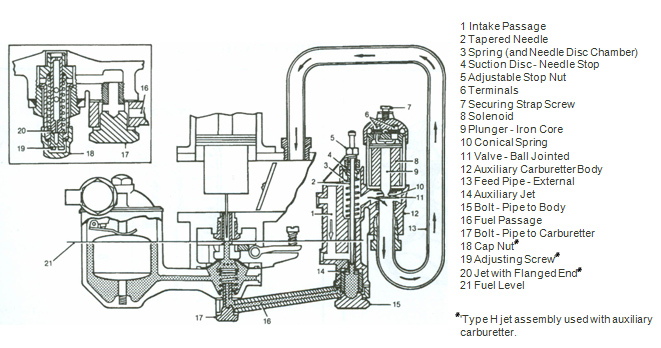 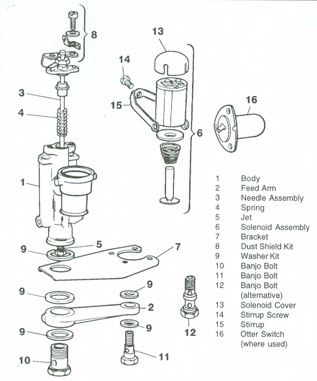 The auxiliary carburetter is used on certain installations to provide automatically differing degrees of mixture enrichment at:

It may be used with single or multi carburetter installations.

The unit may be controlled by either:

When the device is operated, air is drawn from the atmosphere through the air intake into a chamber and is mixed with fuel as it passes the jet. The mixture then passes upwards past the shank of the needle, through a passage, and so past the aperture provided between the valve and its seating. From here it passes directly to the main induction manifold through the external feed pipe as shown in the diagram (top left).

A cup washer is fitted against the solenoid face to centralise the conical spring. Any leakage between the valve and its seating would allow the device to operate and affect the idling setting of the main carburetter(s). If the solenoid is energized while the engine is idling the valve will not normally lift owing to the high manifold depression; the act of opening the throttle will reduce manifold depression and allow the device to operate.

When the valve has lifted, the needle disc chamber is in direct communication with the inlet manifold and the depression, dependent on throttle opening, varies the position of the needle by exerting a downward force upon the suction disc and needle assembly. Thus:

(a) At idling the relatively high depression will draw the needle into the jet until the needle head abuts against the adjustable stop.
(b) At larger throttle openings a reduced depression is communicated to the needle disc chamber and the spring will tend to overcome the downward movement of the needle, thus increasing mixture strength. 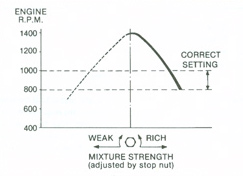 The procedure for mixture adjustment is the same as for normal type H carburetters except that a jet adjusting screw is used in place of the normal jet adjusting nut (see inset diagram) as follows:

(a) Remove the cap nut
(b) Adjust the jet as required, by turning the slotted screw up to weaken or down to enrich the mixture. The slight leakage of fuel through the jet during this operation can be ignored.
(c) Replace the cap nut with its sealing washer.

Tuning of the auxiliary carburetter is confined to adjustment of the stop nut which limits the downward movement of the needle, and is carried out with the engine running at normal temperature and the main carburetter(s) tuned.

(a) Adjust the stop nut(s) with reference to the graph.
(b) Initially clockwise (to weaken) until the engine begins to run erratically.
(c) Then anti-clockwise (to enrich) through the phase where the engine speed has risen markedly to the point where over richness results in the engine speed dropping to between 800 and 1,000 rpm with the exhaust gases noticeably black in colour.